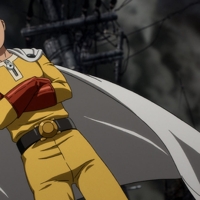 In a world where having superpowers is the norm, heroes fight day and night against the villains who terrorize the populace in order to keep peace and order in the society.

The story follows a seemingly bland but extremely powerful individual named Saitama, who initially fights as a hero for fun. Due to his immeasurable power that allows him to defeat his foes with just a single punch, he eventually loses the excitement he once felt in the heat of battle. After meeting a cyborg named Genos who he soon accepted as a disciple, Saitama officially joins the Hero Association with hopes of finding a worthy opponent, and maybe for a little bit of popularity that the other heroes enjoy.

About the Show One-Punch Man

One-Punch Man is an anime adaptation of an action-comedy manga series under the same name, illustrated by Yusuke Murata. Originally published as a web comic series created by ONE, it quickly gained popularity and earned 7.9 million hits just 3 years after its first release. Produced by studio Madhouse, the anime series aired a total of 12 episodes (plus 7 OVAs) from October 4, 2015 until December 20, 2015 for its first season.

You might think how impossible a series about a superhero who one-punches everyone can entertain you, but you’ll find One-Punch Man as a funny show to watch once you give it a try. It has a set of characters and story that effectively blends comedy and action, making every episode worth a watch. The following are short introductions to some of the series’ main characters starting with the protagonist himself:

Saitama
Once an ordinary man, Saitama trained rigorously to obtain his god-like abilities, and losing his hair in the process. Despite his effectiveness in fighting crime, he is largely unnoticed by the masses, which might be a cause of his blandness and lack of flair in battle. He does not care much about most things, except for money-saving related events like bargains.
Skills:
Al