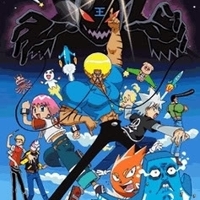 In the year 300X, the entire world is under the tyrannical rule of the Maruhage Empire, and their ruler, Tsuru Tsurulina IV (Baldy Bald the 4th). His Hair Hunt troop captures innocent bystanders’ hair, leaving the people bald and their villages in ruins. Standing against this evil regime is the heroic, but bizarre, rebel, Bobobo-Bo Bo-Bobo, who fights the Hair Hunt Troop with his powerful Hanage Shinken (Fist of the Nose Hair). His team consists of the normal teen girl Beauty, the smelly teen warrior Heppokomaru (Gasser) and the Hajike leader Don Patch (Poppa Rocks). Bo-Bobo is on an exciting, gag-filled quest to deliver his own hairy brand of justice to evildoers everywhere