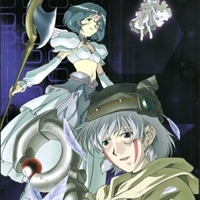 .hack//Sign follows the story of a young wavemaster known by the alias Tsukasa. He woke up inside an MMORPG, without any memory of the events prior to his arrival in The World. Moreover, Tsukasa cannot log out of the game like other players do.

As he explores The World in search for answers, Tsukasa stumbles upon a “guardian”, who promises to protect him from all harm. With his guardian and the leader of the Crimson Knights by his side, Tsukasa sets out to investigate his strange case.

.hack//Sign is a sci-fi mystery anime television series written by Kazunori Itou, who is also responsible for the screenplay of the first Ghost in the Shell movie. Produced by studio Bee Train under the direction of Kouichi Mashimo, .hack//Sign aired a total of 26 episodes (plus 3 OVAs) between April 4, 2002, and September 25, 2002.

Episode 1: “Role Play”
Tsukasa awakens and finds himself in The World. Strangely enough, he has no idea who he is, and why he was there. To make matters worse, he learns that he cannot log out of the game, and is trapped within The World.

Episode 2: “Guardian”
The Crimson Knights notice the peculiarity of Tsukasa, and treats him as a hacker. Later, Tsukasa goes to meet Mimiru and Bear to show them his guardian monster.

Episode 3: “Folklore”
BT and Sora suggest that Tsukasa might have some sort of connection with a legendary item called the Key of the Twilight. Bear does not completely accept the idea, and suspects that Tsukasa might be a victim of a more serious case.

Episode 4: “Wanted”
Tsukasa’s guardian suddenly starts attacking other characters uncontrollably in The World. In an attempt to address the situation, Subaru declares Tsukasa a wanted character on all servers of The World.

Episode 5: “Captured”
Now being hunted by most players, Tsukasa goes into hiding. He later learns how to control his guardian. Meanwhile, Sora and the Silver Knight concoct a plan to double-cross Tsukasa,