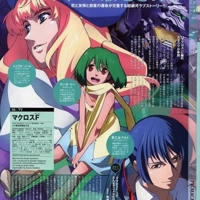 Macross Frontier marks the 25th anniversary of the Macross anime franchise. It is a direct sequel to the first Macross series and Macross 7 and follows the lives of Alto Saotome, Ranka Lee and a pop idol named Sheryl Nome on board the Macross Frontier colonization fleet. After the war against the Zentradi aliens, Humankind has spread across the universe in order to ensure its survival. The Macross Frontier fleet is part of a effort to spread and maintain the culture of humanity.