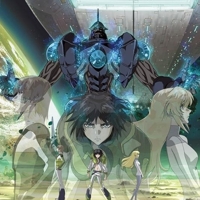 A futuristic anime wherein the Golden Tribe/Race invites others with them in the stars. They shared their knowledge to the Silver, Bronze and Heroic Tribes. But before leaving the current galaxy they were in, they met a fourth race they now call as the Iron Tribe, a tribe of humans with great accomplishments.

The Silver Tribe believed that the Iron Tribe and together with the Bronze Tribe, wreaked havoc against the humans. Fortunately, humanity survived and they made the decision to scatter and somehow preserve their race.

Princess Dhianeila, heeding to a prophecy left by the Golden Tribe, journeys to search for the savior of humankind. She then meets a wild-haired boy – a person who will contribute to the fate of the universe.

Heroic Age is an anime written by Tow Ubukata. It was produced by the studio XEBEC under the direction of Takashi Noto with a total of 26 episodes that aired from April 1, 2007 until September 30, 2007. The first five episodes has a narrative about the different Tribe.

Episode 1: “The Ruined Planet”
When the Iron Tribe gets threatened with extinction, their princess Dhianeila went off to search for the being that will become their savior. They reach a ruined planet and encounter a boy who calls himself Age. They soon get attacked by the Bronze Tribe but luckily for them, they also get to witness the power of their savior.

Episode 2: “The Forgotten Child”
Age is then invited to go on the Argonaut. A ceremony gets held in his honor, but Age ruins it with his wild behavior. Soon after, they get attacked by the Bronze Tribe again.

Episode 3: “The Heroic Tribe”
Age gets taught about the human’s history and he also gets a makeover. The ship soon gets attacked. A member of the Silver Tribe gets involved in the battle.

Episode 4: “The Planet Titarros”
Still under pursuit from the Silver Tribe, the ship tries to get supplies from the planet of Titarros. Iolaous and Age travel onto the