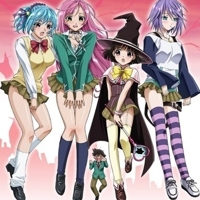 Failure Human Tsukune is unexpectedly put into a school for monsters, where he meets the cute vampire Moka. He later meets succubus, Kurumu, a young witch genius, Yukari, an ice girl, Mizore, and Ruby a second older Witch Adept, Ruby. All of them fall in love with him, causing numerous problems throughout the school. Tsukune has to survive many jealous male monsters along with a gang of rebel monsters trying to destroy the school. All the while trying to survive his unexpected harem fighting amongst themselves for his undivided attention.