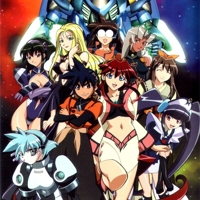 For generations, the men of the planet Tarak have waged a valient war of survival against their fierce enemies of the planet Mejale women! Hibiki finds himself completely out of his depth, first as a stowaway on a space battleship and then as the prisoner of the women who hijack it! A strange missile sends the hijackers into a remote corner of the galaxy where the women and their prisoners encounter a mysterious new enemy that may force them to join forces! Can men and women actually work together without killing each other?!