Oh! My Goddess: The Movie 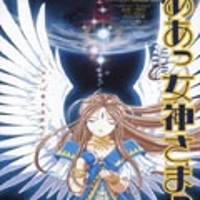 A prisoner, Celestin, escapes from the moon prison. Soon, Celestin appears before Belldandy and kisses her, causing her to faint. Peorth in Asgard, informs Urd about Celestin’s escape. Someone then get’s a virus into Yggdrasil through Belldandy, which causes Asgard to seal off all connections to Midgard, isolating the Norns. Belldandy finally wakes up, but she has lost all memories of Keiichi. Peorth reports the incident to the council and Belldandy and Keiichi travels to the NIT.
During their stay there, Morgan appears and approaches Keiichi. Due to Morgan’s interference, Belldandy participates in the motorcycle race being held by The NIT Motor Cycle Club to beat her.
After the race, some of Belldandy’s memories return, but Celestin appears again and triggers some buried memories, especially the image of a strange gate.
Urd and Keiichi rescue Belldandy from Celestin, but Keiichi gets hurt in the process.