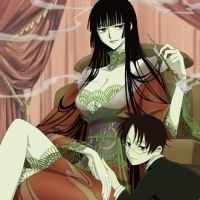 Kimihiro Watanuki is a peculiar high school student, as he possesses an ability that allows him to see the supernatural. One day while he was walking home, Watanuki accidentally stumbles upon a strange shop, where he meets its owner, Yuko Ichihara. Yuko claims to be a powerful witch, who can grant wishes of her customers, but with a price. Annoyed and plagued by the spirits he sees, Watanuki wishes to get rid of his special ability. The witch agrees, but he must in turn work as a part-time cook and housekeeper of the shop as payment. Although he was mainly hired for household chores, Watanuki is often sent on errands by Yuko, where he slowly discovers the wonder and strangeness of the supernatural world.

xxxHolic is an anime adaptation of the supernatural, comedy manga series under the same name, written and illustrated by a group of manga artists known as Clamp. Produced by Production I.G., the series aired a total of 37 episodes (divided into 2 seasons, plus 4 OVAs), between April 6, 2006 and June 26, 2008. The series is well praised by critics, and has received several awards since its publication.

Kimihiro Watanuki is the main protagonist of the spirits, and possesses an ability that allows him to see spirits. Due to living alone, Watanuki is very skilled in domestic tasks, which became his work in Yuko’s shop until his wish is paid. He began to love his newfound life working in Yuko’s shop, and has promised that in the case Yuko will have a wish for herself, he will be there fulfill it. He is often tasked to complete supernatural errands, accompanied by his classmates, Shizuka and Himawari.

Yuko Ichihara
Yuko Ichihara is a powerful being and is the owner of a wish granting shop. In exchange for something with the same value, from precious possessions to abstract concepts, Yuko grants the wishes of her clients. Despite usually appearing as immature, drunk, and pushy, she becomes serious whene