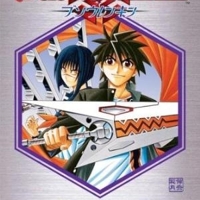 The story begins when high school student Kazuki Muto is killed one night saving a mysterious girl from a monster, only to wake up in his school dorm, believing it to have been a dream. However, he soon finds out that dream wasn’t a dream at all when a giant serpentine monster attacks him and his sister. Tokiko Tsumura, the girl he saved, explains that the monster is a homunculus. Kazuki had been attacked and killed by it when rescuing Tokiko. However she, feeling responsible for him, revived him by placing a Kakugane medallion in his chest, serving as a replacement heart.

The Kakugane, as Tokiko explains, is an alchemical (alchemistic) device that, when activated, takes a certain form based on the Kakugane’s user, forming a unique Buso Renkin. The Buso Renkin is the only thing that can destroy a homunculus monster. Using this, Kazuki creates his own Buso Renkin, taking the form of a giant lance, later named ‘Sunlight Heart’. Along with Tokiko and her own Buso Renkin (the Valkyrie Skirt, an execution scythe), Kazuki joins the fight against the homunculi and their master.