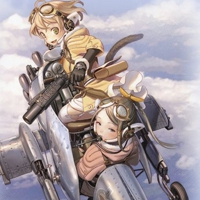 The sequel to Last Exile. Taking place on Earth after the events of the original series, Fam of the Silver Wing introduces a new cast of characters. This series shifts it’s focus onto a young girl named Fam Fan Fan and her friend and navigator Giselle Collette, a pair of sky pirates who suddenly get involved in a national conflict when a ship they are planning to raid from the Kingdom of Turan comes under attack by invading forces from the neighboring Ades Federation. Seeing an opportunity to barter, Fam decides to help out the Princesses of Turan, Liliana and Millia, in exchange for their ship. After successfully thwarting the attack. Liliana asks the two sky pirates to escort her younger sister safely to Turan’s capital. And thus, Fam and Gisey’s adventure begins.