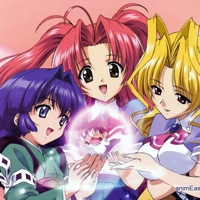 Everyone is born with the ability to use magic in the world of Maburaho and is thus labeled magicians. However, the magical prowess of each person is not equal. The number of times you can use magic is based on someone’s respect and one’s magical power is determined at birth by genetics, so only those who came from a famous bloodline are given importance.

In Aoi Academy student Kazuki Shikimori, a student with the lowest magic powers, is being teased by his classmates and treated like his useless. But being sought after by three different young women: Yuna Miyama, a transfer student who proclaims herself as his wife, Rin Kamishiro, a prideful swordswoman of a traditional family who wants to eliminate him for her to be freed from pursuing her desires, and Kuriko Kazetsubaki, a member of a rich family that only wants him for his genes.

Episode 1: “They Came…”
Kazuki Shikomori have the lowest magic reserve, he is only allowed to use his magic 8 times but on the good side, he is being chased by girls to obtain his gene and to create the most powerful magician in the world.

Episode 2: “It Fell…”
Kazuki found out that he is only chase by girls because of his unique genes. A girl named Yuna reminded him of his past where she promised her that she is going to be his wife someday. Kazuki used his magic to create snow for Yuna, Kuriko and Rin found out that he can really use powerful magic despite the limit in using his magic.

Episode 3: “It Appeared…"
A ghost appeared in Kazuki’s room demanding things from Yuna and Kazuki. Due to Kazuki’s betraying the ghost promise she took Yuna into a Void where she made it look like she’s torturing her, Kazuki uses his power to get