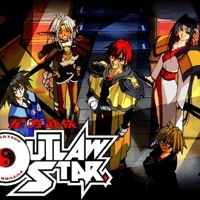 The series takes place in the distant future, 150 years after the development of spacecraft capable of traveling faster than the speed of light, and follows the motley crew of the titular ship: the Outlaw Star.

An animated television series adaptation produced by Sunrise Studios aired on TV Tokyo from 8 January 1998 to 25 June 1998, totaling 26 episodes. The English language version of the series was produced by Bandai Entertainment and ZRO Limit Productions. An edited version aired on Cartoon Network’s Toonami from January 15, 2001 to February 16, 2001 which skipped episode 23 due to nudity and suggestive themes.
By : Wikipedia.com