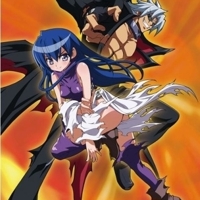 Set in the near future, year 2150, Japan. 50 years after the official end of World War III, battles still persist in the war-torn country, and have produced completely unexpected results. Mysterious large “Black Spots” have spread across the land, containing many cities and other residential areas. Unfortunate civilians were trapped inside in order to stop possible further contamination. Over time, these people started to mutate, gaining different powers and later came to be known as the Needless.

The story follows Adam Blade, a remarkable Needless bestowed with the ability of enhanced regeneration and superhuman strength. Together with his trusted allies, they must stop the evil group known as Simeon, and finally restore peace in their dying country.

Needless is an anime adaptation of the action-comedy manga series by Kami Imai. Produced by studio Madhouse, the series aired a total of 24 episodes between July 2, 2009 and December 10, 2009.

Episode 1: Adam Blade
Cruz Schild survives an encounter with a Testament after Adam Blade rescues him, and takes him to their headquarters. However, Cruz runs away after being scolded by Eve Neuschwanstein. Cruz is nearly killed, after the Simeon Tower sent Kafka to kill him. Adam and Eve defeats Kafka using their respective fragments.

Episode 2: Eve Neuschwanstein
Cruz and Eve are attacked by the magician Uten, one of Simeon Tower’s elite members. Thanks to Cruz’ keen observation, Eve manages to overcome Uten’s tricks.

Episode 3: Momiji Teruyama
Adam is engaged in a heated duel against Momiji Teruyama, after the latter declared that he is on a mission to kill a man named “Adam”. However, everything turned out to be a misunderstanding, as his real target was Adam Arclight, and not Adam Blade.

Episode 4: Iron Mountain
Arclight orders the Simeon Girl Squadron to capture Blade, so that he may replace his weak body with Blade’s. Meanwhile, Teruyama with The Misfits