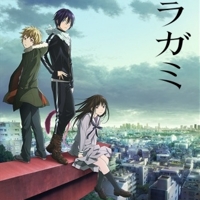 Yato, a minor god, dreams to become the most revered deity in the world with big shrine and all. However, being a penniless god that he is, he has a long way to go and his shinki leaving him doesn’t help matter. Later, when he does his job, a high school girl named Hiyori Iki pushes him out of the way of a speeding bus; unaware of his status as deity.

Things get complicated when this incident triggers abnormality in Hiyori’s soul, causing her to make an Astral Projection whenever she falls unconscious. To turn herself back to normal, Hiyori must help Yato becoming a better god who can fix the problem, along with Yato’s new shinki, Yukine.