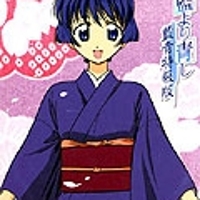 One day, Hanabishi Kaoru, second year university student, came across a young woman in a kimono who seemed distressed. She was searching for a certain person whom she had not met in years. While she had an address, this was only her first time in the city. Kaoru decided to offer his assistance. However, the address she had led them to an empty plot of land.

Kaoru brought the distraught woman to his home where she presented him with a childhood photograph of herself and the person whom she was searching for, the only remaining clue she possessed. Remarkably enough, he recognised himself in the photograph. It turns out that she was Sakuraba Aoi, sole heir to the wealthy Sakuraba family. She had been matchmade with Kaoru and had spent 18 years preparing for this. However, when Kaoru left the Hanabishi, he was disowned by the family and the engagement annulled. She came to entreat him to return to the Hanabishi. How will Kaoru reconcile his feelings for Aoi with the reasons that drove him away from the Hanabishi?