Pokemon: The Spell of the Unknown [Movie] 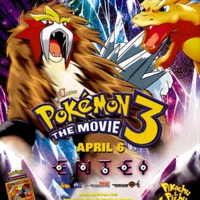 Professor Spencer Hale, once one of Professor Oak’s top students and a good friend of the Ketchum family, is obsessed with discovering the secret behind the mysterious glyph-like Pokémon called Unown. One day while investigating some ruins, he disappears after encountering the enigmatic creatures, leaving his only daughter, Molly, alone and lonely back at his mansion. When a shipment of tiles from the ruins arrive at the mansion, the girl’s depression and desire for companionship invokes the Unown trapped within them. As Molly wishes, they
Molly discovers the Unown tiles use their reality-warping powers to seal off the mansion and the surrounding valley of Greenfield in crystals and create an image of the legendary Pokémon Entei to stand in for her father.