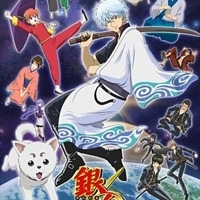 It’s not your typical shonen. You might be wondering, what’s Gintoki’s end goal here? Well, unlike the typical shonen protagonist like Luffy or Naruto, Gintoki doesn’t have any ambition. All he wants is to drink alcohol, pay his rent, gamble, and occasionally indulge in some chocolate parfait and strawberry milk.

A samurai living in an era that doesn’t need Samurai any longer. Poor Gintoki.

Another thing about Gintoki is that he doesn’t have any special moves. You may find that funny from a shonen protagonist, but it’s the truth. He doesn’t have a Rasengan or a Kamehameha wave, but you do see him practicing that last move because Gintama is essentially a parody. Even his sword is unremarkable. It doesn’t have any name or extraordinary power that’ll help him in times of need.

The differences don’t stop there. Gintoki is extremely lazy and has connections with both sides of the law, the police and the wanted terrorists. The usual heroes you see in shonen manga and anime are in their teens but Gintama starts with Gintoki as a man in his late twenties. Lastly, he’s not brave and has no appetite for adventure.