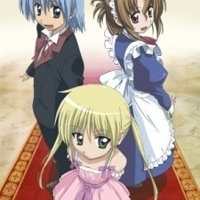 Hayate Ayasaki is an unfortunate young boy whose parents have a serious gambling addiction. Despite working really hard and trying to make ends meet, Hayate was abandoned by his parents and left him an overwhelming 150 million yen of debt to the Yakuza. It was then decided that Hayate’s organs will be harvested in order to compensate for what his family owes.
During his escape from his terrible fate, Hayate encounters Nagi, heir to one of Japan’s wealthiest families. He decides to kidnap her for ransom, hoping that he will be able to pay off his debt. But due to a string of unexpected events and misunderstanding, Nagi falls in love with Hayate, who she later hired as butler after being saved from her kidnappers.
Aside from performing his tasks as a regular butler, Hayate must protect Nagi from the people who wants to steal her fortune. As Hayate gives his best to attend to his duties, he unintentionally attracts the attention of many girls, making his chaotic life as butler even more interesting.

Hayate the Combat Butler is the anime adaptation for the action, harem, romantic comedy manga series under the same name, written and illustrated by Kenjiro Hata. Produced by the studios SynergySP, J.C. Staff, and Manglobe, the anime series aired a total of 101 episodes (divided into 4 season), between April 1, 2007 and July 1, 2013. Along with light novels and anime films, a videogame was also created based on the series.

Hayate Ayasaki
Since his childhood, Hayate is shown to be a very unfortunate individual. With his father refusing to work and his mother’s compulsive gambling behavior, he had to make money on his own to make ends meet. He moved from one job to another until he was found to be underage, where he gained much of his experience and understanding of how the world works. After accumulating a massive debt of 150 million yen, his parents decided to leave him to the Yakuza as payment. However, he was given a ray of