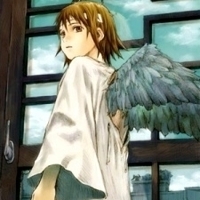 The story follows Rakka, a girl who finds herself breaking out from a cocoon after waking up from a strange dream. She is welcomed by the Haibane, angel-like people who live at the Old Home.

Although they live a peaceful and quiet life in the town of Glei, the Haibanes do not know much about their world, except that there are strict rules to be followed. One example of such rules is that, they cannot touch nor go beyond the massive walls that surround Glei.
While performing her tasks as Haibane, Rakka struggles her way through her doubts and questions about her existence.

Haibane Renmei is an anime adaptation of the drama fantasy doujinshi entitled Haibanes of Old Home, created by Yoshitoshi ABe. The anime series aired 13 episodes on Animax between October 9, 2002 and December 18, 2002.

Episode 1: Cocoon — Dream of Falling from the Sky — Old Home
A girl dreams that she is falling from the sky, and that a crow is desperately trying to save her. The dream is interrupted after she wakes up and finds herself inside a huge cocoon. Shortly after freeing herself from the cocoon, she is tended to by a group peculiar people, as if they were waiting for her to emerge. The angel-like people introduced themselves as the Haibane, and just like her, they barely remember anything, except that they were named after the dreams they had prior to arriving in this world. The Haibane named her Rakka, which corresponds to her dream of falling through the sky. After presenting Rakka with her own halo, the Haibanes leave for the night except Reki. Reki stayed to accompany Rakka through the short but painful ordeal of growing her wings for the first time.

Episode 3: Temple — The Communicator — Pancakes
Reki finds herself lying on the floor after waking up from a nightmare. Rakka