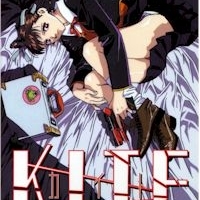 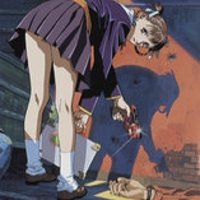 Sawa is a school girl, an orphan, and an assassin. She is being controlled by a corrupt cop who gives her targets to kill, detailing to her the crimes these men have committed in order to justify their death. Some of his power over Sawa has to do with her deceased parents and the promise of revenge. When another orphan, a teenage boy called Oburi, is brought in to assist Sawa, the two teenage killers form a bond of sorts. As they heal each other’s emotional wounds, they begin to dream of a life that would not be spent under the shadows of murder.

This gritty story is one of the darker animes that isn’t entirely ecchi, except for the completely uncut version which includes many graphic sex scenes. The most commonly released versions of Kite are edited, yet still R-rated, versions.

The show begins fairly graphic, showing Sawa assassinating a target; a famous person who really seemed to be kind of a jerk himself anyway. She does her job ruthlessly and without questioning her orders, showing her skill as a world class assassin. It’s not until she meets another assassin of the same caliber that she begins to question the situation she is in, and start making more harsh judgments on her handlers. By the end of the show, she has taken a more assertive position, but the ending could be considered tragic, depending on your interpretation.