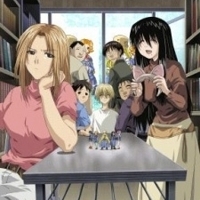 The story follows an introvert college freshman named Kanji Sasahara, who was just looking for a place to belong to. During club day on his university, he decides to join a club that he will actually enjoy, hoping that he will fit in. He stumbles upon a club called Gendai Shikaku Bunka Kenkyuu Kai (shortened to Genshiken), a society that aims to bring otaku culture and its members together.

However, his first visit to Genshiken went awful, as his fragile pride was shattered by his senior, Harunobu Madarame. He leaves Genshiken, still denying that he is an otaku at heart. He then meets a club member Makoto Kousuka, who, despite his good looks and charm, is a hardcore otaku and was not ashamed to show it. From then on onwards, Sasahara accepted his otaku nature, and began immersing himself in otaku culture, enjoying his time inside Genshiken.Meanwhile, Makoto Kousuka’s girlfriend Saki, tries her best to make his boyfriend a “normal person” again.
Watch the members of Genshiken share love for their common hobbies, and how they deal with the trials and adventure they face as an otaku.

Genshiken is an anime adaptation of the comedy, slice-of-life manga series under the same name, written and illustrated by Shimoku Kio. Produced by Palm Studio, the series aired a total of 37 episodes (divided into two seasons, plus 3 OVAs), between October 11, 2004 and September 29, 2013.

Makoto Kousaka
Despite his charming looks and cool demeanor, Makoto Kousaka is one of the most hard-core member of the Genshiken. He defies the stereotypes for otakus, as he can b