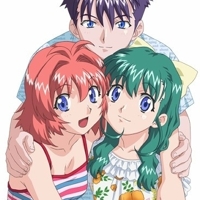 Maiku Kamishiro grew up in a orphanage with only a childhood picture of himself and who he believes is his twin sister. He thought he finally found his home when he managed to find the house in the picture and moved into it. But then one day, Miina Miyafuji and Karen Onodera, show up on his doorstep, both claiming to be his sister. All three of them have the same picture and same color eyes… But since there are only two kids in the picture, one of the girls must be a stranger. With two pretty girls living under the same roof with him, will Maiku be able to keep his mind on school and his programming job?