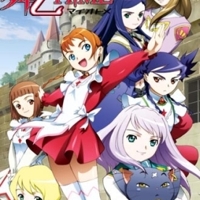 Arika Yumemiya ventured a lot of place in search of her true purpose: the prominent Gualderobe Academy. This school is known to train young girls to become Otomes, guardians of noble leaders throughout the lands. Arika made plenty of friends and allies, but a there’s a setback because some of the enemies knows some of Yumemiya’s history. Despite of those disadvantages her resolve will never falter.

Adapted from Mai-HiME its predecessor, this is not a direct sequel to Mai-HIME, but an alternate universe setting featuring some of the Mai-HiME cast (though with different personalities).

Episode 1: “Dreamy ☆ Arika”/ “Yume no ☆ Arika”
Young Arika Yumemiya travels to the Kingdom of Wind bloom searching for her mother to ask for guidance to become an Otome. She met Nina a student from Garderobe, the rebellious princess Mashiro and Nina’s foster father Sergay. A salve monster attacks Arika, Nina and Mashiro, they had a hard time defeating it but Meister Otome Shizuru Viola easily get rids of it, Arika was inspired by the heroic deed of Meister Otome Shizuru.

Episode 2: “A Gust Running Through the Garden of Otome”
Deeply inspired after witnessing Shizuru’s power, Arika is even more determined to become a real Otome and attend the school of Garderobe. Sneaking out of the infirmary and evading the students pursuing her, she arrived at the room of the otome council where they are discussing the incident past incident and Nina’s judgement for her negligence, as Arika proclaims her intent to join.

Episode 3: “First T-i-m-e”
To redeem qualification to enter the Otome school of Garderobe, unexperienced Our hero Arika must face her friend Nina in an exhibition battle during the coronation ritual of Mashiro, knowing that if she defeats her, Nina will be expelled. Nina has the advantage in the match, but an enigmatic knight invaded during the ceremony, and Arika catches a falling airplane, holding it long enough for Brigadier