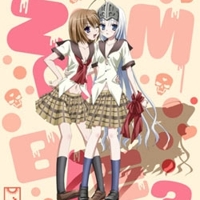 The passive high school boy Aikawa Ayumu gets killed during a spate of mysterious serial killings. However, he is resurrected as a zombie by the necromancer girl Eu, whom he had befriended just before dying. When Ayumu reawakens he is tossed into a world with masou shoujo (magically equipped girls) and vampire ninjas. And of all things, he is assigned the duties of such a masou shoujo by the magical warrior girl Haruna. Ayumu is still a zombie, chosen (much to his dismay) by Gaia to learn of the dark secrets in the world — that should never see the light of day. And so life, as it is, with short-tempered vampire ninja Seraphim, chainsaw-wielding prodigy masou shoujo Haruna, and mute necromancer Eu continues under one roof. Late after school, to avoid getting sunburned, Ayumu encounters the alcohol-prone fairy Chris. This overly cute adult in a childs body is up to something… life at school could be so peaceful, if it were not for the enemies of the masou shoujo.