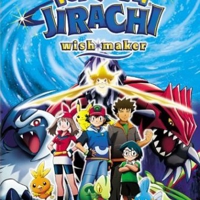 The story revolves around the Millennium Comet, which appears in the night sky for seven days once every thousand years. It is, at the same time, when the legendary Pokémon Jirachi awakens from a long slumber to absorb the comet’s energy. This energy, in turn, is released into the Earth itself, making an area known as Forina grow. This time, however, a magician known as Butler, along with his longtime girlfriend Diane, unearth the stone that had encased Jirachi, and take it away from Forina.