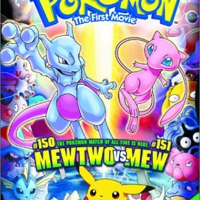 Dr. Fuji, a research scientist of Team Rocket, briefly describes in a prologue how his researchers uncovered a fossil of the remnants of Mew, one of the rarest Pokémon in existence, believed to be extinct (although this is not the case). Using the DNA of Mew and a research laboratory, they created Mewtwo. Mewtwo, is a Psychic Pokémon that instantly distrusts humans upon learning they intend on experimenting upon him, and using his
Mewtwo in Giovanni’s armoramazing powers, he levels the base, killing Dr. Fuji. Head of Team Rocket, Giovanni, approaches Mewtwo and offers him an alliance, Giovanni promising to help Mewtwo control his powers. Mewtwo is “trained” over a course of several months but he soon is told by Giovanni that Mewtwo is merely his tool. Mewtwo destroys Giovanni’s headquarters and flies back to the remains of the laboratory island. He decides to find his own purpose and destroy all those who oppose him. He deems the relationship of humans and Pokémon living together horrific and declares that his reign will soon begin.