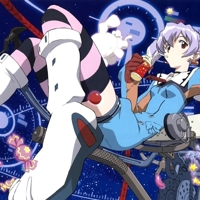 While Gunbuster’s final mission destroyed the space monsters’ star system, the intergalactic war still continues. Earth’s only hope lies in the hands of “TOPLESS”, an elite mecha group with children possessing supernatural powers and new Buster Machines. Among their ranks is a rookie named Nono and the ace pilot Lal’C – whom Nono looks at as a “big sister”. Together with their teammates Nicholas and Chiko they must aim for the top and protect all of mankind from the wrath of the space monsters.