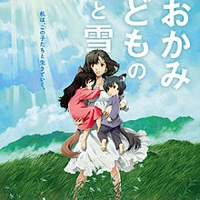 Nineteen-year-old college student Hana meets a young man who sneaks into her classes for lessons and falls in love with him immediately. They soon start dating. One day, the man reveals his identity to Hana; he is a Wolfman and the only surviving descendant of the extinct Japanese wolf. Undeterred by this fact, Hana invites him to live with her. A year later, when Hana becomes pregnant, she decides not to visit a hospital out of fear that her child would be a wolf. Their daughter, Yuki, is thus born at home on a snowy day, along with her brother, Ame, who is born a year after her, this time on a rainy day. Not long after Ame’s birth, the Wolfman suddenly disappears. Hana searches frantically, only to discover that city workers were working to remove a wolf’s carcass from a canal. He had died accidentally while hunting to feed the children. Although devastated by the loss of her beloved, Hana resolves to take good care of her wolf-children by herself.

However, Hana discovers that living in the city with her children was extremely difficult. yuki, who is temperamental, often switches between her human and wolf form, creating a lot of noise, making the neighbors unhappy. Child-protection officers have been hounding Hana because her children had not gone for the compulsory immunization program. Making matters worse, her landlord receives complaints that she was keeping pets at home due to the wolf cries made by Yuki and Ame, and threatens to evict her because the apartment forbids pets. Eventually, Hana decides to move to the countryside and stumbles upon a dilapidated house that was virtually rent-free, but requires a lot of renovation work. Most importantly to her, however, is the fact that the nearest neighbor is miles away, and the house is surrounded by nature.

Hana gets down to work immediately, repairing the house and later tried to grow crops. Initially skeptical of her at first, the other villagers warm up to her and help her to settle in. One fierce old m

This anime was really good