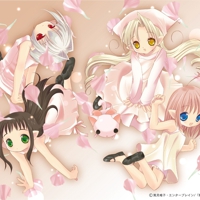 The Bottle Fairies, who have come from another world, are attempting to learn many things about the world so they can gain knowledge and turn into humans – a feat they finally achieve in episode 12, set in the twelfth month, thus making the series span a whole year. However, as their wish to stay together is stronger than their wish to become human, they merge into one human, while retaining their several personalities. The thirteenth episode shows the fairies attempting to function as a single human girl, before eventually splitting into four fairies again. This extra episode makes Bottle Fairy the typical length of a small