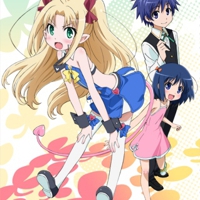 In the medieval fantasy world of Alfheimr, succubus princess Astarotte Ygvar, the first princess of the kingdom of Ygvar, has just reached the age of 10. For the coming years of a young succubus’ life, it is necessary for them to have a male harem. In order to maintain their body and preserve their beautiful appearance, they must consume a substance only found on males. This substance is a liquid called Sauzfryma, better known as semen. The princess, however, bears a great dislike against men, and only agrees to create a harem if a human male is to join. The catch is, nobody has been able to travel between Alfheimr and the human world, Midgard, for over a millennium.