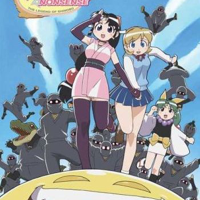 Ninja Nonsense is an absurdist comedy centering around Shinobu, a ninja apprentice, who is attempting to pass her ninja exams while Kaede, a normal schoolgirl, studies for her school exams. As a part of her exam, Shinobu is ordered to break into Kaede’s room to steal her panties by her instructor, Onsokumaru. Shinobu, who despite her enthusiasm, possesses little if any actual ninja skills, believes herself to be invisible and ‘sneaks’ into Kaede’s room. Since Shinobu is perfectly visible to Kaede, the mission does not go as planned. Despite all of this, Kaede takes pity on Shinobu and the two become close friends. Shinobu trains alongside other male ninjas identical in appearance, though one is known as Sasuke.