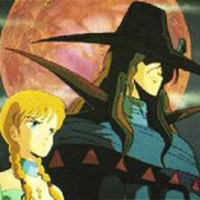 In the year 12,090 A.D technology and the supernatural have overtaken the world. But thanks to the overzealous ambitions of man, the world remains desolate and despotic. What’s left of the human race is divided into various towns and cities living in fear of vampires who compose and exist as the Nobility, fending off the monsters and mutants as a result of their existence. On a night five days after the Count Magnus Lee had harmlessly tasted the blood of Doris Lang and chosen her to be his next wife, she hires a vampire hunter by the name of ‘D’ to rid her of such an ill-gotten fate. As a dhampir (half human, half vampire), there exists a distinct resentment between the hunter and his prey. But as the Count finds out, there is also a peculiar secret behind the past of the Vampire Hunter D.