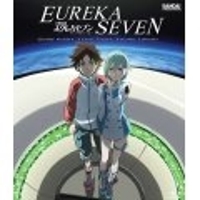 In the early 21th century, Earth came under attack from the alien Azo, who creep their influence across the globe over the course of the next few decades. That initially means little to a young Renton Thurston, however, who delights in hanging out with the sunlight-averse girl Eureka and Nirvash, a cutesy little critter who will one day grow into a transforming mecha-like being. Though the two make a wish to stay together forever, Fate and certain military forces have other plans, and they are cruelly torn apart. Eight years later the two are reunited when Renton, who has become a military mecha pilot using Nirvash’s grown-up form, rescues a “special item” from a base under Azo attack, an item which happens to be a very fatalistic Eureka. During the struggles that follow, Renton and an aged investigator independently and gradually learn the truth about Eureka’s alien nature, the purpose various factions mean for her to serve, and the real nature and motives of the crew of the airship Gekko, Renton’s military unit. With the government in the process of enacting a bold plan to use a space-based solar laser to wipe out the Azo (but at the cost of incalculable damage), everyone’s future may ultimately depend on the dreams of one teenage boy, the girl he loves, and their role in a fateful myth.