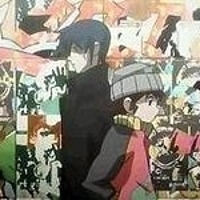 Several hundred years in the future, the natural resources of the Earth had been depleted, causing humankind’s progression to stagnate. The world is now divided into “Units”. A boy named Hajiki Sanada lives with his mother and sister in Unit 74, in a place called “Night Town”, in which all electricity is shut down at midnight.

The key in this story is an object called the GAD. GADs have the ability to reconstruct materials while reacting to feelings of an organic life. The size and shape of the resulting product seem to be different depending on the kinds of feelings that the life possesses. When Hajiki comes in contact with one by accident, it transforms into a huge robot—a Techode, or “Iron Giant”—which Hajiki names Lightning. And soon he realizes that he isn’t the only one with a Tekkoudo, and must find out how to deal with those others who he feels are the “same” as himself.

Gad Guard is a mecha-adventure anime television series. Produced by studio Gonzo under the direction of Hiroshi Nishikiori, Gad Guard aired a total of 26 episodes between April 2003 and September 2003. A light novel was produced under the same name, which was written by Umoto Kyouhei. Its 4 volumes were published between May 24, 2003 and September 25, 2003.

Gads
Known as mysterious stones with immense powers, the Gads are highly sought after in the Gad Guard universe. Due to its high value, the rich and powerful are the only ones who usually have possession of these stones. While its true importance is unknown, these stones react to strong emotions and can transform into one of the following: Techodes, A-Techodes, or Gadrians.

Techodes
Techodes are one of the three creations that come from a Gad. It takes form in a large humanoid robot standing at 20 feet high. It can be controlled by a human, and is fueled by the emotional bond between the Techode and its owner. Techodes are usually spawned from peopl