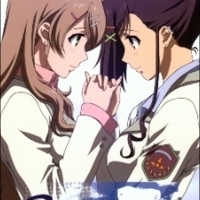 Before Candy Boy (Kyandi Boi in Japanese) was a series, it was first released as an original net animation which lasted around eight minutes during November 22, 2007. A year later, it was followed by its seven-episode series which ran from May 2, 2008, to May 8, 2009. Both the original net animation and the seven-episode series is directed by Takafumi Hoshikawa and under the studio of AIC (Anime International Company, Inc.).

The story’s genre is a romantic comedy focused in the high school setting between the characters. The romance in Candy Boy revolves around the blossoming affection and love between twin sisters Yukino Sakurai and Kanade Sakurai which experiences disputes due to Sakuya Kamiyama’s strong feelings towards Kanade. Aside from being a romantic school comedy, Candy Boy’s genre is also under the category of Shoujo Ai (Romance between girls).

In addition to the original net animation and its series, Candy Boy had two extra episodes released in its DVD edition which occur at different times during the series. In November 2009, a Manga adaption was also published by Media Factory entitled Candy Boy and Candy Boy Young Girls Fall In Love!. The manga adaptions, unlike the original net animation and series, have four additional characters namely Yuriko Takanashi, Eri Miyagi, Masumi Kurasuma, Isako Mikanagi – three of which are Sakuya’s classmates and one being Kanade’s classmate.

Coming from the Hokkaido region of Japan, twin sisters Kanade and Yukino Sakurai move in the same room at their school dorm in Tokyo. During this time of having a fun filled school life, a first-year student named Sakuya Kamiyama approaches Yukino and professes her admiration for her twin sister, Kanade – that of which, Sakuya claims to be love. After confessing her feelings for Kanade to Yukino, Sakuya asks for Yukino’s support. Knowing about Sakuya’s feelings, Yukino begins to trade photos of Kanade to Sakuya in exchange for gift certificates, cand