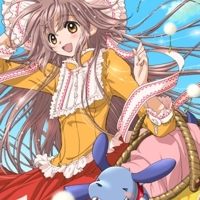 The story follows Kobato, a sweet but naïve girl on a mission to collect and fill a bottle with “konpeito”. In order to obtain a konpeito, Kobato must heal a person’s suffering heart.

Despite her eccentricity and air-headedness, Kobato’s sincerity touches the hearts of the people she meets. However, this delightful gift has a penalty – she is not allowed to fall in love with a person she had “fixed”.

Accompanied by a spirit in the form of a dog plushie, Kobato must fill the bottle with konpeito before the four seasons end.

Kobato is an anime adaptation of the fantasy-romance manga series under the same name, written by Clamp. Produced by studio Madhouse under the direction of Mitsuyuki Masuhara, Kobato aired a total of 24 episodes between October 6, 2009, and March 23, 2010.

Episode 1: “…A Girl’s Wish”
Kobato Hanato arrives in the Human World, and is given several tests by Ioryogi to prove her worthiness of the bottle. She has varying success with the tests given to her by Ioryogi, but finally receives the bottle after calming a crying baby.

Episode 2: “…The Shining Kompeito”
Ioryogi tells Kobato that in order to fill the bottle, she must heal other people’s heart. Following the stranger who helped her before, Kobato ends up in a daycare. There, she finds a boy waiting for her mother.

Episode 3: “…A Gift from the Rain”
Sayaka sees Kobato sleeping in a park, so she takes her to a friend, Chitose Mihata, who gives Kobato a room in her apartment building. The next day, Kobato meets a school girl named Mustumi.

Episode 4: “…Spring Green and the Flutter of the Heart”
Kobato meets an angel Kohaku, who appeared to be sad. The next day, she discovers that Kohaku is in love with Shuuichirou Kudou, and thus her quest for another konpeito begins. Later, another angel appears to Kobato, and tells her that she only has a year to fill the bottle, else it will be taken away.