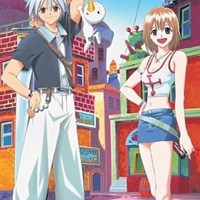 The Dark Brings – stones that contain corrupted power – ignite a destructive war between the forces of good and evil. Left with no choice and faced against the ever-growing power of evil, a swordsman uses the holy power known as the Rave in an attempt to destroy the Dark Brings. This caused a massive explosion that destroyed a tenth of the world, and came to be known as the Overdrive.

Rave Master takes place fifty years after the events of Overdrive, when an evil group called Demon Cards wreak havoc once again with the newly found remains of the Dark Bring. The return of darkness also calls for the return of light, and Haru Glory is made the new Rave Master, along with its guardian Plue. Haru and several other warriors must now band together, and save the world from Demon Card’s hands.

Rave Master, also known as The Groove Adventure Rave, is an anime adaptation of the action-adventure manga series under the same name, written and illustrated by Hiro Mashima. Produced by Studio Deen, the series aired a total of 51 episodes (divided into two seasons) between October 13, 2001 and September 28, 2002.

Haru Glory
Energetic, friendly, and persistent, Haru Glory was made Rave Master by Shiba, shortly after accidentally fishing Plue out of the ocean. Since then, Haru has promised that he will find the lost Rave Stone with Plue, and stop the Demon Card’s evil plan. He is joined by several adventurers during his journey, and fights with his shape shifting sword, the Ten Commandments.

Elie
Similar to Haru, Elie is as energetic and lively, and loves going to casinos. She suffers from amnesia, and has no idea how she lost her memories. Haru is very protective and always looks out for her, but she can also fight using her ton-fa blasters.

Plue
Plue is a strange small creature, resembling a shivering snowman with a carrot for a nose. Despite Plue’s harmless appearance, he possesses several powers. Being the Rave Bearer,