Beyond Skyrim! (A skyrim mod series.)

Well, Skyrim anniversary edition didn't excite me, but Beyond Skyrim's trailer for Cyrodiil came out on the same day, and damn. Sit down for a second and just watch this.

Beyond Skyrim is a project I've been following since they split from Tamriel Rebuilt back in Oblivion. It is often confused for total conversion mods like Skyblivion and Skywind. But it is an attempt to add each of the provinces as they are in the 4th era. Many may know the brand of BS Cyrodiil from their prerelease, Bruma, which is actually just a sneak peak at what they aim to create. But even though it's just that, it sets a professional standard for their content that feels just like it was an official expansion. And NO, it is not just a copy paste of what you see in ESO or Oblivion/Morrowind/Daggerfall. They intend to make the provinces in their image, which takes from a lot of lore that ESO forgot or changed. (Especially in High Rock, which was made a much more boring place in a lot of ways. BS aims to correct that.)

And again, they aim to do this for each of the provinces so that the player could eventually leave skyrim and continue their adventures all over the continent. To give an idea of where each project under the Beyond Skyrim umbrella is at currently... 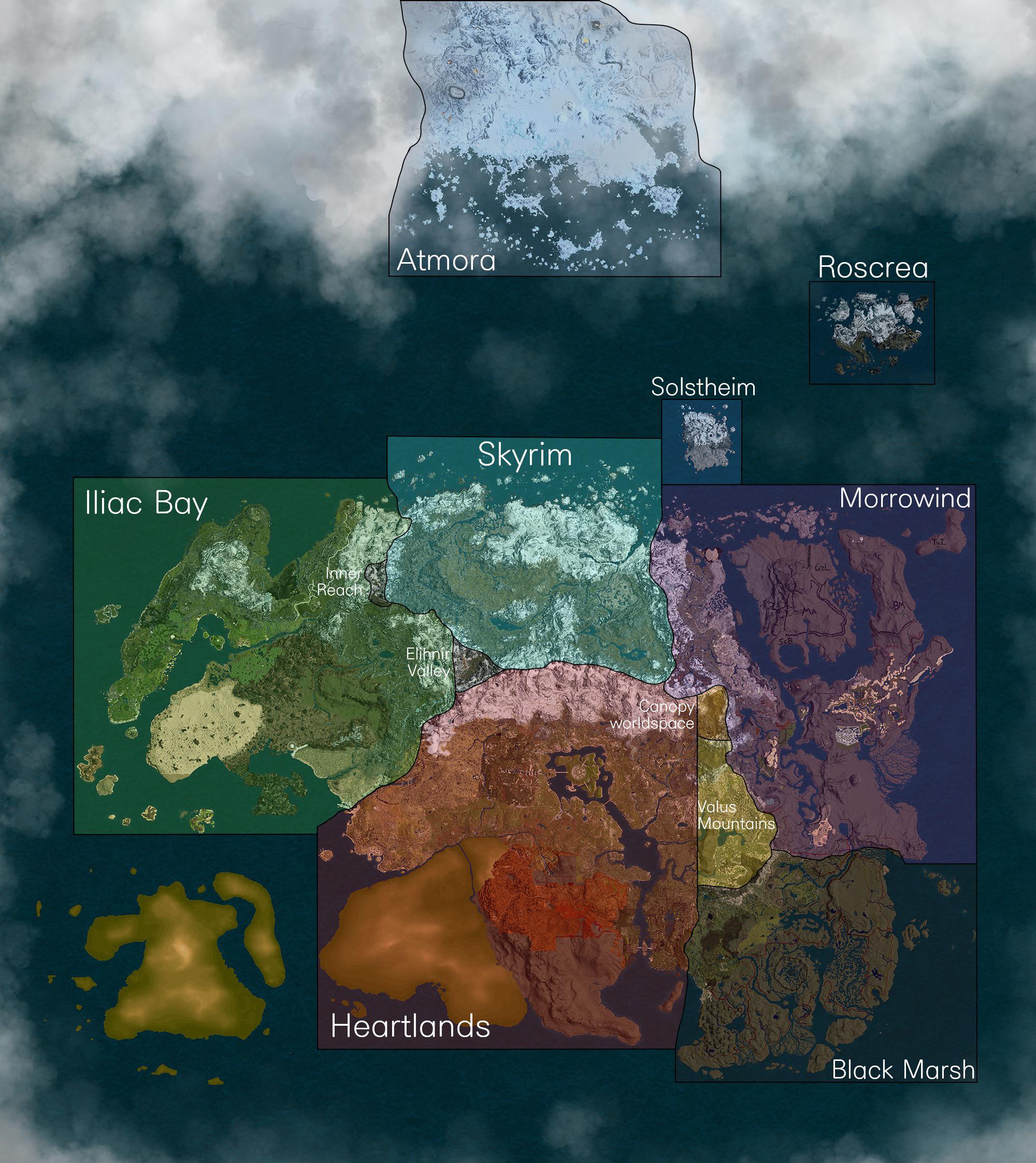 Beyond Skyrim: Iliac Bay, The Tower of Dawn. This is the project I follow most closely, and therefore know the most about. Iliac Bay encompasses High Rock, Orsinium, and Hammerfell in the same world space, and are also prepping for their prerelease content. For IB, that will be the Three Kingdoms, adding Jehanna and Farrun from High Rock, and the Abecian Isles in Hammerfell. Last I heard, even though they had the largest world space (Until Elsweyer announced they were going to be in the Cyrodiil worldspace), they were also the farthest along, but certain tilesets needed a remaster since they were holdovers from Oblivion mod assets. They've taken a step back to work on the prerelease areas first before any other part of the continent, but they've already done a 4 1/2 hour walkthrough of their content a few years ago, and a lot of it has received a second pass since then. Certain assets they were waiting on, such as the sandstone caverns for Hammerfell caves, Yoku Ruin tileset for Hammerfell Ruins, and the Breton Castle and Breton Crypt sets for various ruins and stronghold dungeons have finally reached the hands of the implementers, which is a huge step forward. As of I believe April, they implemented their first quest. Here's the out of date walkthrough they did, no need to watch it all at once. Even though its from 2018, and they've made a lot of progress since then, they go into detail about a lot of questions, plans, and design philosophies in the project.

Beyond Skyrim: Morrowind's also has a prerelease underway which will be 'The New North' which will be the Sheogorath islands north of Vardenfell. It might even encompass some of mainland Morrowind's Redoran territory, but don't quote me on that. This is of course after the eruption of Vardenfell, so the landscape may not be as familiar as you saw remember it being in Morrowind.

Beyond Skyrim: Elsweyr is going to add the land of the Khajiit in the same world space as Cyrodiil, and is still in the asset creation and first pass landscaping. The most recent look we've gotten at their progress was this walkthrough, which also explores their Cyrodiil and Roscrea progress.

Beyond Skyrim: Cyrodiil, the Sunderred Seat of Kings (As you have seen in the trailer) are basically done with landscaping and city design, and have moved onto the quest and NPC implementation stage. Bruma has received it's final update today to help prep for the eventual full release of Cyrodiil. The whole province is actually larger than the Cyrodiil we've seen in Oblivion, and they plan on elaborating on a lot of the lore that was never seen in that game, such as the societal and cultural differences between Nibeneans and Colovians, the Niben Cults which rise and fall over night, the Machiavellian politics and plots that you'd expect more from a Game of Thrones novel, and an injured empire reeling after the great war and oblivion crisis prior to the Dragonborn's adventures. Not every city will be as you remember it, as some places change rather drastically over 200 years. Also will add Sutch, that city that Bethesda basically forgot existed.

Black Marsh is about where Elsweyr is at, though they started a little later. Although since the Blackwood swamp tile set (made for Cyrodiil) is complete and graphically makes sense to be used in the border region, parts of it's landscaping and world space design have a head start.

Roscrea is in its final polishing stage. Huzzah! Expect a release sometime soon. Since it's about the size of Solstheim, it doesn't require nearly as much work as the main provinces, and the similar Atmoran heritage makes it culturally similar to Skyrim. That said, they're still going all out with the cultures on the island to make them distinctly different from vanilla skyrim. We've all seen new lands mods that reuse vanilla assets a million times now, and one of BS's main goals is to make you feel like you're not in skyrim anymore, even if the culture is similar to that pseudo viking feel.

And Atmora, last I heard in 2020, were moving into the later stages of development.

As for Valenwood and Summerset Islands, those two have been picked up by another group (Nirn Uncharted). And there are talks in reddit of a possible merge with Beyond Skyrim after Cyrodiil gets released. They have talked on Reddit about frequently sharing lore to make their works consistent with the extensive writing that the Beyond Skyrim team had done to make sure your dragon born's adventures through every province in Tamriel feels natural.

Most of these releases are still a long way off, but we're well past the halfway point with Cyrodiil, Iliac Bay, and Roscrea at least.

Happy 10 year skyrim anniversary everyone! Who else is excited

The mod creators for the Elder Scrolls deserve more than half the credit people give Bethesda.

Obviously I'm salty about the 10 years.

Yeah, been a fan since Daggerfall. The old school fans basically got the middle finger ever since Oblivion. Then they get to Skyrim and suddenly the Nords forgot they had their own pantheon, they gimped on one of the largest cities in Tamreil, Winterhold.

"Oh, great collapse. Its just some shacks and a school now."
"Then why is the sea of ghosts devoid of rubble?"

To be an elder scrolls fan is to diet off of pretzels and salt water I'm afraid. XD

Morrowind is still my favorite ES to this day. I never got the chance to play Daggerfall. I feel old when confronted with the fact that Skyrim is 10 years old.

I feel like everyones first ES is their fav. I like oblivion but hate skyrim. Couldnt get into morrowind either.

Actually, by the time I got into Daggerfall, we had already purchased Morrowind, but couldn't get it to run on the computer we had at the time. Then I noticed Tes II on my dad's shelf and was like "Well, let's just play that."

Morrowind was a huge step forward in a lot of ways. Even if the size of the world map was nerfed, they still kept that tone of "This is a real world." And to be fair, I love both Oblivion and Skyrim, but they were massively dumbing down on what we had been promised in the past from Morrowind.

Oh another mod I've been curious about actually released an update today as well. For those of you who think the main story and quests need a revamp, there's this.

I just watched a playthrough a couple nights ago of this guy that did a horror mod on Skyrim. It didn't look too bad. Changed the atmosphere, added a bunch of horror creatures.

Ah guess he did it for Halloween.

LOL His character is Keanu Reeves.