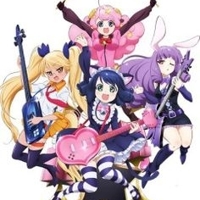 Cyan Hijirikawa is a first-year high school student who has a good passion for music. However, she is very shy and doesn’t have the courage to join the school’s music club. But on one fateful night, she gets sucked into the rhythm game she had been playing on her smartphone after receiving an item called “Strawberry Heart”. Cyan ends up in a new world called Midi City, a place where those who command music control everything. There, she sees a concert performed by a kemono band called Trichronika and realizes she had taken on the form of a white kemono cat girl, dressed in a costume resembling Gothic Lolita fashion. However, when a “dark monster” starts to attack the concert and begins to corrupt the Melodisian stones of the Trichronika members, Strawberry Heart materializes in Cyan’s hands and tells her to play something with it to defeat the monster. As she saves the band from turning into dark monsters themselves, she returns to her human form, but retaining her cat ears and tail. She is then approached by Maple Arisugawa, the CEO of Banded Rocking Records to join his recording agency. She meets ChuChu, Retoree, and Moa, the vocalist, bassist, and drummer of Plasmagica, one of Banded Rocking Record’s bands. Retoree asks Cyan to join, and she accepts. Together, they all tackle and perform together in the music scene, aiming to be the best music band of all Midi City, discovering the secrets surrounding the Dark Monsters and importantly for Cyan, to find a way to get back to her own world.