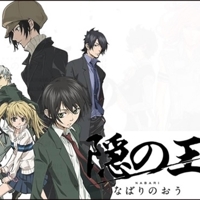 Nabari no Ou follows the story of a 14-year-old boy named Rokujou Miharu. Cold and apathetic, Miharu is the bearer of the Shinrabanshou, a powerful technique coveted by many ninja clans. The Grey Wolves, a ninja clan that will do anything to further their own interests, have now their sights on Miharu and the Shinrabanshou.

Despite his apathy, Miharu is forced to seek protection to ensure his survival. His classmate Kouchi, and English teacher Kumohira have both vowed to protect him, until he is ready to become the ruler of Nabari.

Nabari no Ou is an anime adaptation of the action-supernatural manga series under the same name, written and illustrated by Yukhi Kamatani. Produced by J.C. Staff under the direction of Kunihisa Sugishima, Nabari no Ou aired a total of 26 episodes spanning from April 6, 2008, to September 28, 2008.

Episode 1: “The Awakened One”
Miharu Rokujou discovers that he possesses the Shinra Banshou, after surviving an attack from a ninja without much effort. Tobari pledges his loyalty and service to Miharu, and tells him that the Kairoushuu clan is after the Shinra Banshou.

Episode 2: “Raimei Arrives”
A samurai from the Fuuma Village named Raimei Shimizu has arrived, with the objective of testing the bearer of the Shinra Banshou. Despite her initial disappointment, she later learns that Miharu only wishes to avoid hurting other people.

Episode 3: “Surprise Attack”
The group arrives at Fuuma Village and finds it under attack by the Kairoushuu clan, who are after the village’s kinjutsushou – Tenpenka. The four immediately rush to protect the village, but loses to Yoite’s Kira.

Episode 4: “Duty Declared”
Kairoushuu clan leaves from the Fuuma Village with the Tenpenka. Kotarou concocts a plan to steal the kinjutsushou from the other clan, while Tojuro also does the same.

Episode 5: “Greed”
Miharu, Kouichi, and Raimei set out to destroy Banten Village’s kinjutsushou but does not succee