Those Who Hunt Elves [TV] 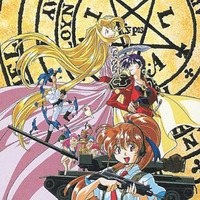 No one knows exactly how stongman Junpei, Hollywood actress Airi, teenage Ritsuko, and their T-74 tank landed in a world of elves, but it’s up to Celcia, the elves’ elder, to cast the spell to send them back to their own world. Unfortunatly, the spell runs amok and splits into five fragments that now appear as tattoos upon the bodies of five elves, five young female elves that is, somewhere in the land. So begins the quest of Those Who Hunt Elves to strip every elf they can lay hands on until they find the missing spell pieces.