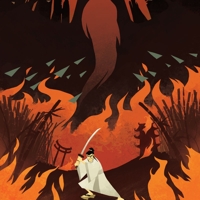 Samurai Jack is an American animated television series created by Genndy Tartakovsky for Cartoon Network. The series follows time-displaced samurai warrior “Jack” (voiced by Phil LaMarr) in his singular quest to find a method of traveling back in time and defeating the tyrannical demonic wizard Aku (voiced by Mako Iwamatsu). Episode plots range from dark and epic to lighthearted and comic, but often contain little dialogue. Stories instead rely on the series’ highly detailed, outline-free, masking-based animation, as well as its cinematic style and pacing. Many battle scenes in the series are reminiscent of samurai films, and since Jack’s robot enemies bleed out oil or electricity and his monster and alien foes bleed out slime or goo, the action of these films can be exhibited while avoiding censorship for blood and violence.

Samurai Jack premiered on August 10, 2001, on Cartoon Network and has since garnered high critical acclaim. It won four Primetime Emmy Awards, six Annie Awards, an OIAF Award, and received eight additional nominations. Cultural influences on the series range from the 1970s TV series Kung Fu to the works of director Akira Kurosawa. The series ran for four seasons, totaling 52 episodes, and the series ended on September 25, 2004. All four seasons have since been released on DVD by Warner Home Video. Reruns had frequently been aired on Cartoon Network’s sister channel, Boomerang, until the series moved to Adult Swim’s Toonami block for reruns on February 1, 2014.

In 2014, WatchMojo.com ranked Samurai Jack as the third best cartoon that got cancelled.