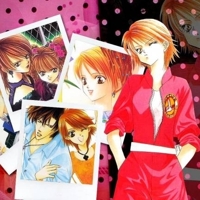 Despite being smart, diligent, bright and hard-working, Mogami Koyoko is really naïve.Having to work multiple jobs just to support her childhood friend,upcoming pop icon and the love of her life, FuwaShoutaroa.k.aFuwaSho. On a busy day in the café where she works, she hears her co-part timers talking about Sho and how he’s rising on the top. Kyoko was sheepishly smiling inside because of the supports Sho gets from people.

People are comparing Fuwa to a top actor named TsurugaRen and he’s somewhat hated by Sho and Kyoko that’s why Kyoko is happy to hear one of her co-workers to switch from Ren to Sho. At the same time, her co-worker showed two life sized posters from buying the first edition of his 2nd album. Kyoko was devastated when she realized that she didn’t get any poster when she bought two CD’s. She even waited outside the store on the day it came out and was the first one to buy it. Her co-worker encouraged her to take her receipt to the store and show it to them and say she didn’t get a poster. She rushed to the store and crushed in with her bike. Fortunately she did get one poster.

She didn’t have the time to wander around any longer because she’s late with her other part time job in Darumaya. She got there on time but she’s really tired and haggard to work but she can’t take the day off since she won’t be able to pay the rent for her apartment. Her concerned lady boss told poor Kyoko it’s not right to come to Tokyo and work every day after graduating from middle school. She was asked if she ever wanted to doll herself up like other girls her age. She wants to but she realized no one can be beautiful without money.

Kyoko spends all her money on paying the luxurious rent of her apartment and never gets anything for herself. She cuts her hair on her own, her bag was given to her from the Darumaya owner, and her bike is borrowed from Darumaya and her over worn jeans and jacket is from four years ago. She never bought anything for herse