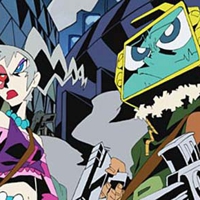 Retro and Pandy, two unlikely renegades, awaken naked on Earth with no recollection of their past, but with superior physical abilities. After embarking on a brief but devastating crime spree for food, clothing and transportation in downtown Tokyo, they are captured by authorities and sent to the infamous prison called Dead Leaves, on the half destroyed moon.
Once incarcerated, Retro and Pandy are subjected to the activities taking place inside the prison facility, such as forced labor, straight jackets, and mandatory defecation. During one such time, he meets Chinko, an inmate with a drill for a penis. 666 and 777, the super-powered prison guards, demonstrate their power when 777 flicks an inmate in the face, killing him, along with everybody else behind him.
Back in their cell, Retro and pandy orchestrate a mass prison break and discover the secret work being carried out at the facility. Over the course of the film, it is discovered that Pandy and Retro were spies working at the facility and the crazed warden is trying to get revenge on Pandy by recreating a deranged fairy tale she remembers from her childhood.
In the finale, Pandy has Retro’s child, who comes out with twin machine guns and blows the warden away. A giant caterpillar (part of the demented fairy tale) begins consuming the station until the mutant baby sacrifices himself so that his two parents can live. The film ends with Pandy and Retro crashing in the middle of Earth’s dystopian metropolis in their escape pod, crushing a previously-victimized bystander.