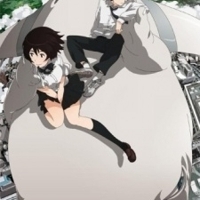 When a gigantic, unearthly monster suddenly looms on the skyline of a Japanese city, the expected occurs—the Japan Self-Defense Forces roll out the tanks while the public panics. Nobody knows what it is or where it came from, but Yuki, a bold and inquisitive teenage girl, has a secret but might be a useful clue. Her friend Tetsu has been clandestinely caring for a bizarre creature called Cenco, which will soon prove itself to have some remarkable, even impossible characteristics. Another teenage boy, a stranger with some mysterious link to the monstrosity attacking the city, shows up, and his unwelcome interest in Tetsu’s pet snuffs out any doubt of a connection—and lights the fuse for the coming battle.