Sword of the Stranger [Movie]

sword of the stranger 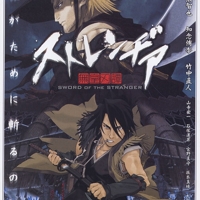 The film follows a swordsman with no name and a golden-haired assassin as circumstances draw them towards a mysterious young boy.
Hunted by the Ming from China, young Kotaro and his dog meet a nameless samurai (“Nanashi”) who is haunted by memories of his past which have led him to avoid drawing his sword ever again. Among the Ming is a fearsome Western fighter named Luo-Lang, whose only desire is to find a worthy opponent. When both groups clash with a Sengoku-era feudal lord, a proud general, and monks torn between faith and survival, the reason behind the Ming’s pursuit tests the bond between Kotaro and Nanashi.