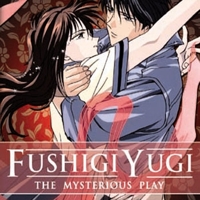 This OAV (original animation video) adventure brings back all the characters from the sprawling broadcast series—even ones who were killed. When Miaka, Tomahome (who now lives in the real world), Keisuke, and Tetsuya go visit the grave of Takikio, the one-time priestess of Genbu, Tomahome mysteriously vanishes back into Universe of the Four Gods. Miaka and Yui join him there, causing the Warriors of Suzaku and Seiryu to reassemble. Their reappearance has been arranged by Tenkuo, the former master of the evil Nagako, who hopes to rule the alternate world. Yui summons all four Gods to seal him away and prevent any further contact between the two worlds—which also means Miaka and Tomahome must separate. The secondary characters remain more entertaining than the whiny Miaka, especially sorcerer-in-training Chichiri and mountain bandit Tasuki. Viewers should watch the broadcast series before the OAVs, or they’ll be hopelessly lost. Each episode is followed by an omake, or extra: a chapter of “Fûshigi Yûgi Rest and Relaxation Bus Trip: The Tale of the Forbidden Women’s Hot Spring Resort,” an offbeat farce that features the characters as themselves and as actors playing those roles. It provides a welcome break from the turgid melodrama of the main episodes, much the way Kyogen comedies are traditionally performed with Noh tragedies in the Japanese theater. Genki Yoshimura’s script exhibits some chronological problems. When Tomahome arrived in Konan in episode 1, 50 years had passed since the battle at the end of the broadcast series, and Hotohori’s grandson was emperor. When Tomahome and Miaka visit Konan in episode 5, only two years have elapsed and Hotohori’s infant son occupies the throne. However, these inconsistencies are not likely to trouble fans of this mawkish magical-girl series. Much of the final episode, which is nearly twice as long as the others, is spent on a convoluted subplot involving Tomahome and Taka appearing in the same time and place when they’re th