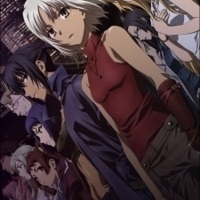 The story follows amateur news photographer Maria Ousawa and her partner Mino, who are assigned to Shanghai to search for newsworthy stories to cover. After noticing that strange events have been happening in the local festival, the duo quickly set out to investigate. In a sudden turn of events, Maria is almost killed by masked gunmen, but was saved by an old friend named Canaan. Meanwhile, a sinister plot involving a deadly virus is swiftly brewing, and Canaan is the only one capable of stopping it.

CANAAN is an anime television series created by Type-Moon co-founders Kinoko Nasu and Takashi Takeuchi, based on a scenario they conceptualized for the Wii visual novel 428: Shibuya Scramble. With studio P.A. works, the series aired a total of 13 episodes, between July 4, 2009 and September 26, 2009.

Canaan
Canaan is the main protagonist of the series, and is a mercenary currently operating in Shanghai. Her weapon of choice is a Beretta Px4 Type G 9 mm semi-automatic pistol, but is also known as an elite marksman and an expert on different styles of combat. She also has the ability to use a unique skill called synesthesia, which allows her to distinguish between civilians and enemies on the battlefield.
During her early years, she lived on a war-torn region in the Middle East. Eventually, their village was destroyed by the war, and she was left as its sole survivor. She was then found by Siam, who adopted her and trained her to become a mercenary, together with Alphard. Having found a new family, Canaan grew to respect Siam as her mentor, and loved Alphard like her older sister. However, during a mission, Alphard betrayed and left Canaan and Siam to die. Canaan survived, with only vengeance as her motivator.

Alphard Al Sheya
Alphard Al Sheya is the main antagonist of the series, and is the leader of a terrorist organization called Snake, which is responsible for the Shibuya and Shanghai attacks. She is much stronge