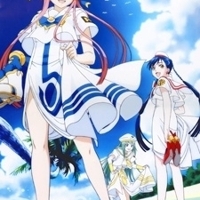 Set in the 24th century, mankind has successfully terraformed Mars, making it a habitable planet and renaming it to planet Aqua. Now mostly made up of water and ocean, humans use unmotorized gondolas to travel around their cities.

The story follows Akari Mizunashi, a young woman who just arrived at Aqua from Manhome (formerly known as Earth). Her dream is to become an Undine – a gondolier that acts as a tour guide – starting her journey in Neo-Venezia, a city that closely resembles Manhome’s city Venice.

Aria is an anime adaptation of the sci-fi manga series by Kozue Amano, which was initially titled as Aqua. Produced by studio Hal Film Maker, Aria aired a total of 13 episodes, between October 5, 2005 and December 28, 2005.

Episode 1: That Wonderful Miracle …
Ai, a pushy young girl arrives at Aria company, and demands Akari give her a tour around the city of Neo-Venezia in her gondola. Akari refuses, as she is still a Single and is not permitted to take customers into tours. Ai finally convinces Akari to give her the tour, after saying that she be treated as a friend and not a customer. During the tour, Ai expresses her dislike towards Neo-Venezia, which causes Akari to retort. However, after meeting and spending the day with Akari and her friends, Ai came to love the city, and asks Akari to become her penpal.

Episode 2: On That Special Day …
Akari is caught under a heavy rain during the annual flooding of Neo-Venezia. She decides to take shelter in Aika’s room at Himeya Company, and there she discovers that the employees respect Aika as she is the heir to the company. However, after being scolded by her strict mentor Akira, Aika decides to leave with Akari and spend the night at Aria’s Company. The following morning, Akira arrives at Aria’s Company and demands Aika t

Real Miku Hatsune @realmikuhatsune commented on Aria the Animation [TV]
Real Miku Hatsune @realmikuhatsune
Nov 18, 17 at 1:04am
This show is so special in a very unique way. It's wholesome and very good, and I wish it was something more popular, but it's particular in that it's just not going to be for a lot of people. I associate this anime with warm summer nights, awake while my family sleeps, slowly dozing as though a gondola is drifting me away... LOL Seriously, though, what a wonderful show! I also recommend the manga for Kozue Amano's beautiful artwork. She has a few art books that include many gorgeous illustrations!